Much of the first 25 theses focused on problems with prevailing views.  That is, in large measure, to this point I have been setting about the destruction of conventional views concerning aging and the foundations of health, views that dominate Western medical thinking about medicine and cognate health issues.

But this would not be a very useful effort if it were little more than a critique of existing medical or gerontological thinking.  Starting with this thesis 26, I will be setting out a positive alternative program, a set of ideas about experiments and health practices that can make a constructive difference to patterns of aging.

Let’s start with the first important idea I had as an experimentalist, in the fall of 1977.  That was when I realized that the natural selection might quickly retune aging if it was artificially strengthened at later adult ages.  A key parameter affecting the force of natural selection acting on survival is the first age at which a population begins to contribute offspring to the next generation.  This parameter is conventionally labeled b. 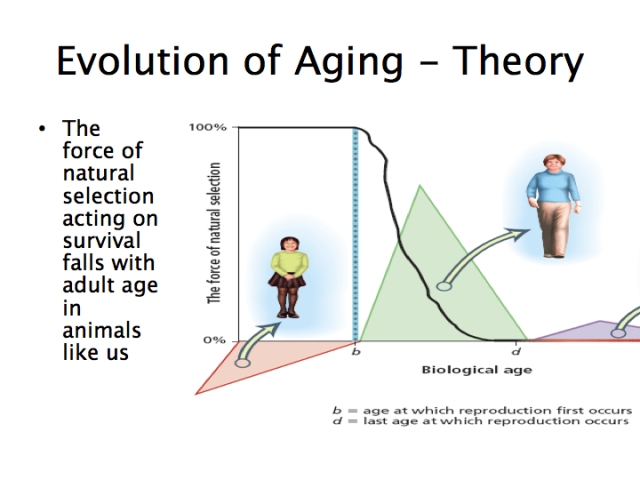 Basically, the force of natural selection acting on survival is weighted according to the proportion of a population’s reproduction that lies in its future.  By increasing the value of b in an experimental context, one would be strengthening the force of natural selection at all ages between the previous value of b and its new higher value.  As a matter of biological practice, b can be shifted upward to a much higher value so long as there are enough fertile survivors available after the new first age of reproduction.

This was simple mathematics.  But what remained unaddressed in 1977 was whether or not there would be enough standing genetic variation, or “heritability” in the language of quantitative genetics, for natural selection to respond quickly to this shift in the force of natural selection.  At that time, we did not know how common such genetic variation was among outbred populations.  In particular, many biologists, even evolutionary biologists, thought that genetic variation affecting characters like survival was pretty thin on the ground.  That was because they were still thinking in terms of evolution in terms of intermittent, rare, beneficial genes arising by mutation and sweeping toward fixation.

This entry was posted in A New Vision, Aging, The New Science, Theses and tagged Michael Rose, Michael Rose 55 Theses. Bookmark the permalink.
Loading Comments...
%d bloggers like this: