Thesis #31 – After the forces of natural selection plateau, it is possible for survival and reproduction to plateau at positive values due to age-independent beneficial effects of some genetic variants.

As with modern physics, again, it is often difficult to intuit how the evolution of health and function will proceed.  The possibility that the eventually plateaus in the forces of natural selection implied that aging might stop was not appreciate by Hamilton in 1966 when he first published their derivation.  Nor was it appreciated by Charlesworth during the 1970s, in the course of his decade-long development of the detailed evolutionary genetic theory which underpins the use of Hamilton’s forces in evolutionary genetic research.  Nor was it appreciated by myself during the course of 15 years of research in which I deliberately re-tuned Hamilton’s forces in the laboratory, using experimental evolution of fruit flies, from 1976 to 1991.

Indeed, it wasn’t until evidence started to accumulate that our interpretation of these equations was erroneous that their implications were re-examined.  Though I am somewhat chagrinned about this, it is a common enough situation in genuine science.  Modern physicists, including Einstein, often didn’t realize the full implications of their own equations, at least not at first.  Thus a significant part of the history of physics in the 20th Century involved the slow discovery, often stimulated by bizarre experimental results, of the manifold implications of the mathematical equations on which it was based.  The same thing is true of evolutionary genetics, the most physics-like part of biology.

In any case, evolutionary biologists have now developed formal analyses of the implications of the plateaus in the forces of natural selection for the evolution of health and function.  One of the most elegant was supplied by Charlesworth himself in a 2001 article.  The result is simple enough that I will try to explain it verbally here.

Separate in your mind age-specific genetic effects from age-independent effects.  Age-specific effects are illustrated by genetic disorders like Huntington’s Disease, which starts to damage the central nervous system of people chiefly in their 30s, eventually causing death a decade or two later.  Then there is Familial Alzheimer’s Disease (FAD), which is a genetic syndrome that causes Alzheimer’s Disease in middle age.  On the other hand, some gene substitutions can have beneficial or deleterious effects across a wide range of ages.  Sickle-cell anemia has adverse effects on blood circulation starting in infancy, and continuing through the rest of life.  Thus, conversely, having the normal gene for hemoglobin has benefits throughout life. 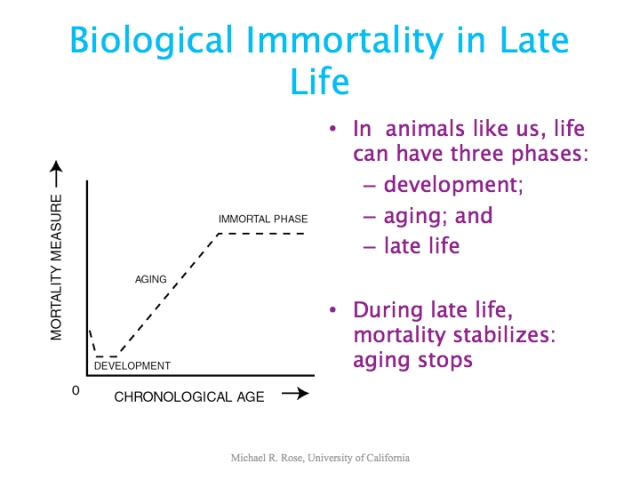 If individuals do not die because of adverse environmental conditions AND do not die because of age-specific genetic effects, they will survive through the aging period to reach a post-aging phase of lowered but sustained survival, thanks to age-independent genetic benefits produced by genetic variants favored at all ages by natural selection.  There is no guarantee that this will always happen, but the equations of evolution by natural selection allow it to, especially when animals are supplied particularly good conditions in which to live.